If you own one of our stands, and it's gotten a little disheveled over time, here is our process for getting it back into shape.

If you have a 20’ wide stand, here are the parts you should have, and what it looks like fully assembled. (Note this diagram does NOT show the straps and ground stakes, which are required if you use the mural outdoors). 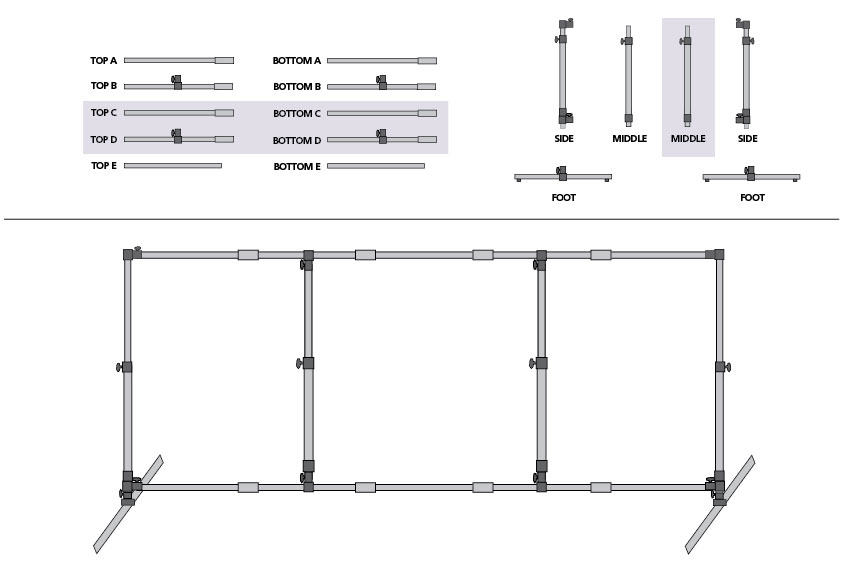 Let's start with the TOPS and BOTTOMS.

All the TOP and BOTTOM pieces will have the little silver "Spring Pegs" sticking out near the ends.  The pieces on either end will only have a Spring Peg on one end, while the pieces in the middle will have Spring Pegs on both ends.  For the pieces that have two, we made both Spring Pegs point in the same direction---so they should line up when you look down the pieces like we're doing in this first photo.  Make sure that looks correct--that nobody has modified or moved the Spring Peg holes.

Also make sure the ends of these tubes are still round.  If they get smooshed or dinged, try fitting it into whatever connector it's supposed to fit into.  If it has trouble fitting, this is a fairly soft aluminum, so you can use a pair of pliers to gently round it out. 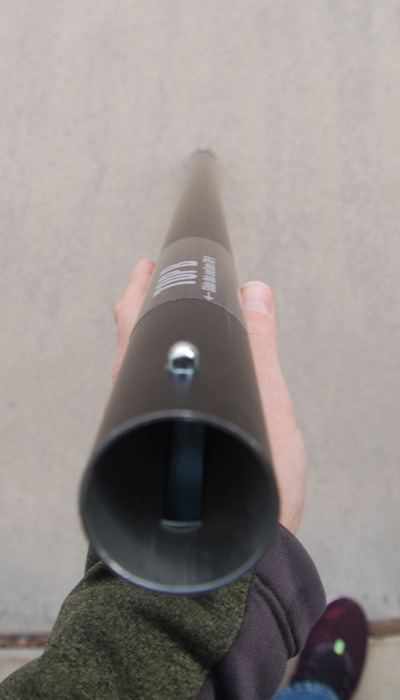 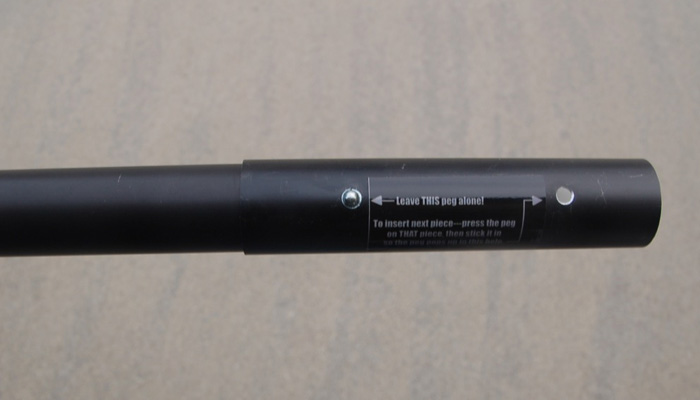 If you have a 20' or a 16' stand, you'll have two TOPS and two BOTTOMS that have a plastic "T-Connector" in the middle of it.  You want these T-Connectors to be in the middle of the piece, and you want them to point in the same direction as the Spring Pegs---like in the next photo.  Now, when you put all the TOPS together, the two T-Connetors will point in the same direction.  (If you have a 12' stand, you'll only have one of these, so don't worry about this step.) 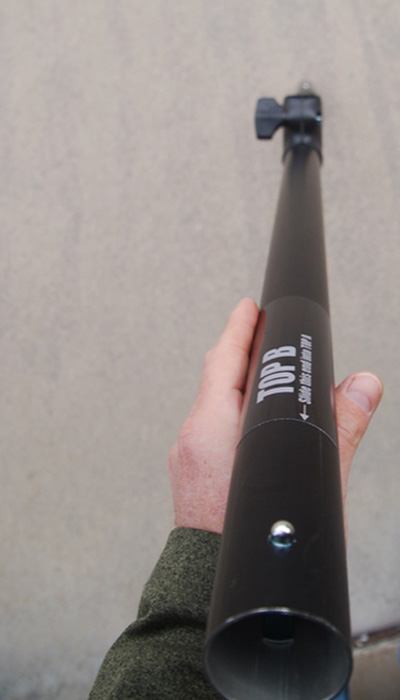 You SHOULDN'T need to use a hex key to move the T-Connector around---you should be able to just loosen the two Hand Knobs to slide it and rotate it.

However, you should still check the back side to make sure they're correct.  The back side of the T-Connectors--shown in the next photo--should have a little hex bolt instead of a hand knob.  Note that the hex knob should be tighted just enough that it looks like this photo---you want a gap that's just big enough to slide a fingernail through.  You DON'T want this gap all the way closed, as the opening side of the T won't close enough to grab the next piece. 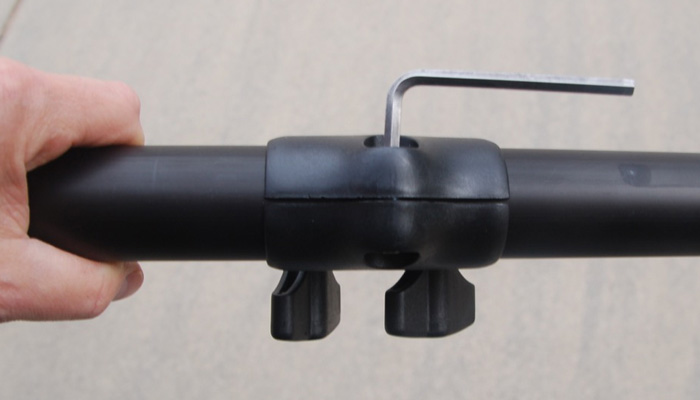 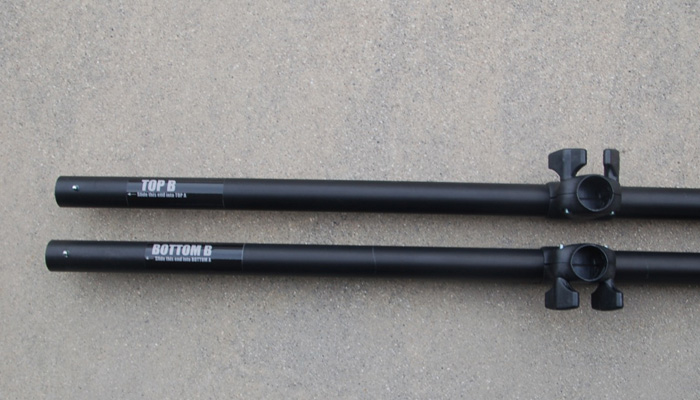 Now lets look at the SIDES.  There are lots of things to check, so let's start by telescoping it out.  Loosen the knob on the "Telecollar" piece, then slide the center section out until you see the etched arrow.  Line the arrow up with the arrow etched on the plastic Telecollar---like this next photo.

Also, check to make sure you have this D-Ring, attached in this position.  You want it pointing out in the same direction as the hardware on the plastic Telecollar, as shown.

Last thing, check to make sure the two Telecollars are lined up.  You want the hardware on both Telecollars pointing in the same direction (sorry, no photo for this).  Everything lines up from these two Telecollars, so this is important.  If they are NOT lined up, use a hex key to spin the one the middle one to line it up with the bottom one. 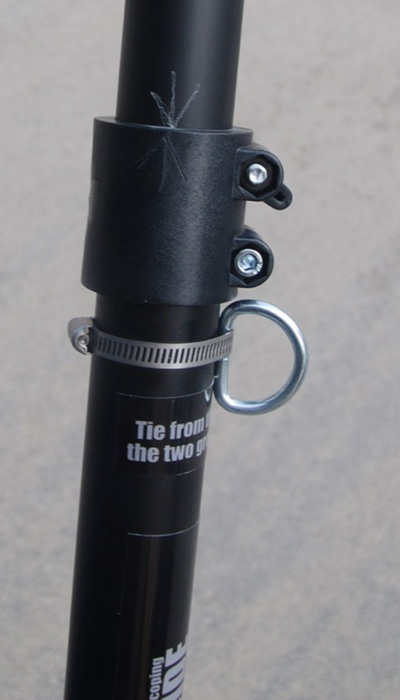 Next let's check the top area.  You should have a T-Connector on the top end, and there should also be an eye bolt---like in the next photo.  Note that the T-Connector should point in the opposite direction of the round "eye" part of the eye bolt. 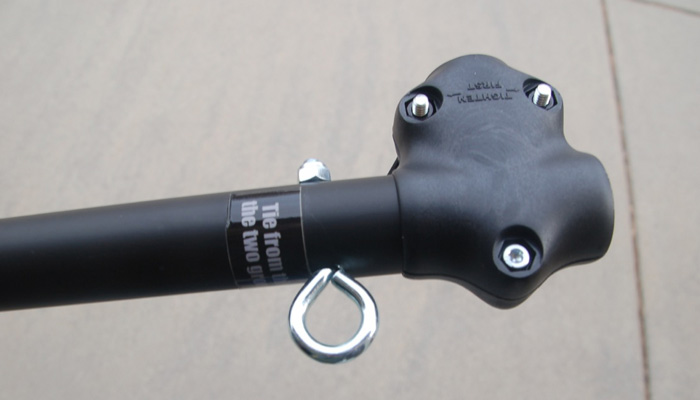 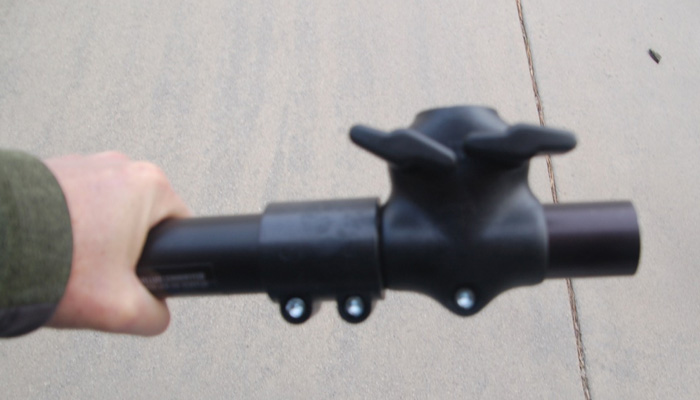 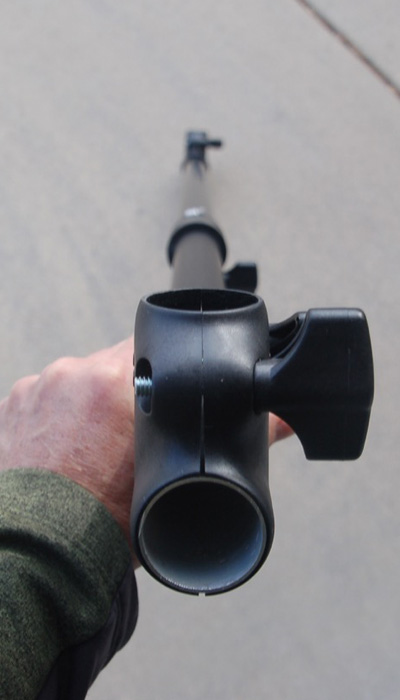 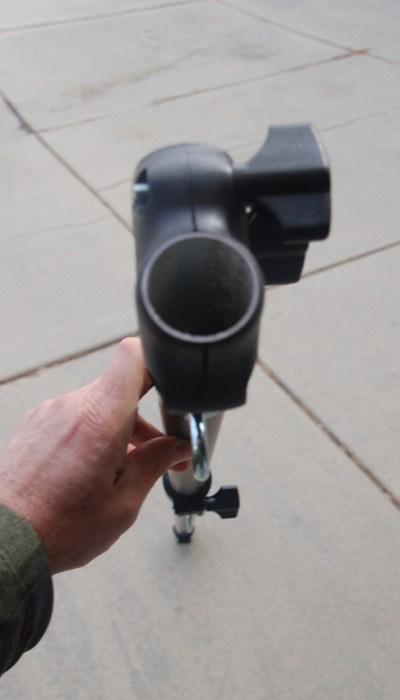 Next let's look at the MIDDLES.  The MIDDLES are similar to the SIDES, just easier.  Extend them just like the sides.  Note that there is an arrow etched on the upper metal section but there is NOT an etched arrow on the plastic Telecollar.  Also, there won't be the D-Ring on the Middle.

At the bottom of the MIDDLE, there should be a Telecollar, with enough tubing sticking out the bottom for it to fit into the next Telecollar. 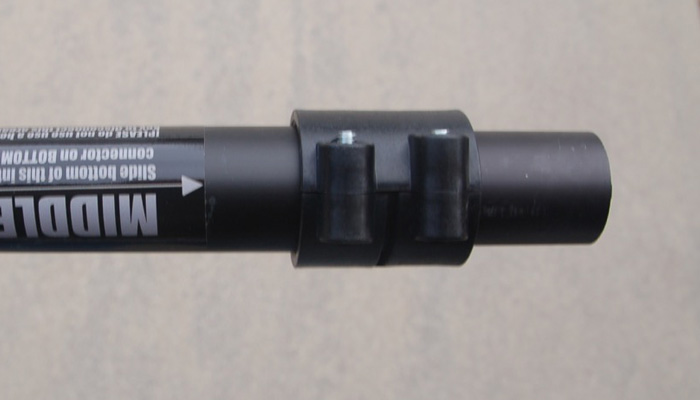 Next, make sure the T-Connector is in the middle of the tube.  It's not vital that it be exactly in the middle, just close.

Then make sure that the T-Connector is pointed in the opposite direction of the rubber knob things on each end.  Again, it's not vital this be exact, but get it close. 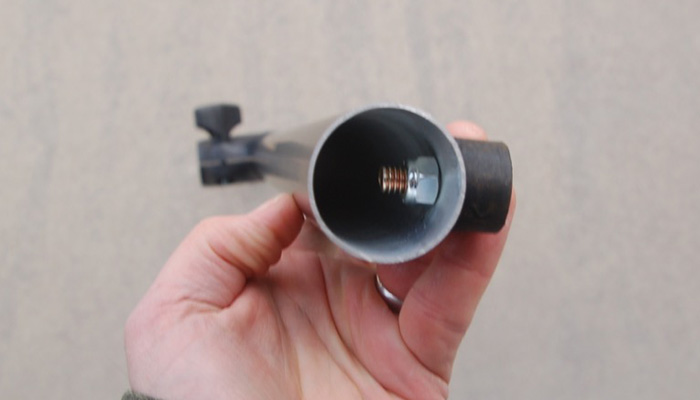